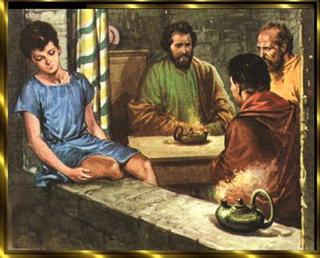 What are we to make of the strange story of Eutychus, the young man who fell asleep during Paul's sermon, fell from a third-story window, (at least appeared to have) died, but was alive after Paul touched him? The incident occurs in the port city of Troas, near if not precisely at the location of the much older, by then passed away city of Troy. Eutychus was very likely a hard-working laborer in the port, and he must have been working quite hard and long on this Sunday. No time off that day it seems. He and many others gathered in that upper room for a farewell message from Paul, who was departing in the morning. Luke includes the important detail of many lamps being lit in that room--no secret gathering, but it might have gotten uncomfortably warm there, which may explain why Eutychus was trying to get a bit of air, sitting in the window. Now, Paul may not have had the most impressive physical or rhetorical presence, but if I were transported back to that night I can hardly imagine that I would have missed a single word that he spoke. Eutychus, however, though he may well have been a faithful follower of Christ, shows his kinship with the brothers who slept in the Garden of Gethsemane when they should have been watching and praying. He was probably asleep when he hit the ground below--it was probably that sound that caught the attention of the others and drove them outside. They certainly took him for dead. Luke, physician that he was, seems to have reached the same conclusion: "He was picked up dead." Commentators have argued and will argue the point of whether he actually died. Regardless, the point is this: any of us can fall (and all of us have figuratively or perhaps sometimes literally fallen) especially when we are less than alert to our circumstances. It is only through undeserved grace that we are given life again-both literal breath and beating heart, but also the life that is never snuffed. It can be a long fall from grace, but grace is sufficient to catch us back up again. Without question, a reprieve from tragedy of this potential magnitude is not something we can expect. I hope and trust that Eutychus was truly grateful after receiving his renewed chance at life. It also seems that he thereafter had a new name, the name that Luke brings to us--for Eutychus in Greek means "Fortunate."