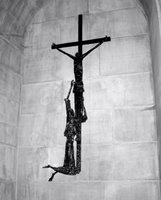 In the course of leading an ambitious life, I think many people forget that there is no problem that is too large or too small to place before God. Just as Pharaoh in Genesis 41:1-13 sought guidance through Joseph, ultimately through God we should try to use God’s wisdom as a compass. I don’t think it’s a matter of asking for a straightforward answer, but of asking instead for the proper path, not just in matters that we feel are too big, but also in matters that seem small. Speaking from a senior’s point of view, I’ve watched a number of friends let homework and college applications build up because it “wasn’t that much.” Instead of tackling it one step at a time, they say it’s too big. It’s the same with social lives, that all-consuming aspect of a high school. Instead of asking for guidance or working through problems with the knowledge that there is a light at the end of the tunnel, my peers let grudges and gossip build up and end up losing their friends. It’s important to tackle all problems not as monsters but as puzzles, even if that puzzle is deconstructing a mountain. Just as God provided us with a Sabbath for contemplation and prayer, he will also provide us with answers. With the knowledge that God can provide a positive outcome to all things, it’s easier to deal with everything else.

There is a joke that has been circulated many times about a man in a flood who turns away a ride out, a boat, and a rescue helicopter because he believes God will intervene. The punch line is that God sent the car, boat, and helicopter to rescue him rather than intervening directly. God surrounds us with other people to help break down our mountains, but people also tend to forget that sometimes we may need to offer our time to others to break down their mountains. One of the most powerful messages Jesus tried to deliver is that we should never turn someone in need away. Just as he went out of his way to help where he could, we should do what we can to help other people. As long as people take the short amount of time to extend a hand to their neighbor, there is no mountain that is too small to move.

Posted by St. Matthew's Episcopal Church at 5:00 AM

I read your devotion Monday. Thank you for writing it. I'm enthusiastically inspired.