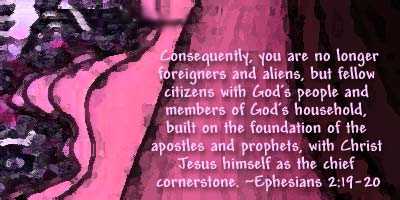 To the people of Ephesus (and perhaps other places as well, for Paul's letters tended to be copied and circulated around the empire) who received this wonderful letter, it is full of fabulous news, but this passage in particular speaks of a great thing that has been accomplished in the here and now: these people are no longer foreigners. Near by or far off, Jew or Gentile, slave or free, it no longer makes a difference. They (and we) are all made one in Christ. The wall has been torn down, for good and forever. No need to make pilgrimage to the temple in Jerusalem; no need for grown men to undergo painful surgery; no second-class, second-best status; Jesus has leveled the field. He has laid himself down as the foundation on which everything now can be built.

All of that is the Good News. But being a Christian has earthly consequences as well. To confess Jesus as Lord is also to say that the Emperor is not Lord (and what woes followed those whom the empire viewed as disloyal). A statement of faith then (and now) is therefore also a political and a revolutionary statement: My primary allegiance is not to any mortal ruler. My primary citizenship, no matter the pride (or lately, embarrassment or shame) I may feel in being an American (as Paul's pride in being a Roman citizen), is not of a nation but of the kingdom of God. Jesus has called us out of the nations, and I, together with my sisters and brothers across the globe and across eternity, am part of God's eternal purpose.

Lord Jesus, thank you for making us part of the royal household. You found us in our hopeless condition and restored us to wholeness. Grant that we may find your peace, and bring your peace to this still-broken world. Amen.
Posted by St. Matthew's Episcopal Church at 6:57 AM