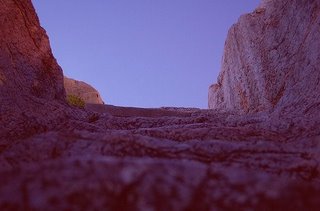 <--In the footsteps of Paul: stone stairway leads up to the Areopagus site in Athens

I have strong and fond memories of Athens. It was there that, as a young Navy lieutenant, I first picked up my six-week-old son, born during my deployment to the Mediterranean. Our new family of three spent several weeks in the Omonia Hotel while my ship was repaired at Skaramangas shipyard--but I digress. From the hills and cliffs that surround the Acropolis, I saw the glory that was Greece. I could easily understand the impact that that architecture would have had in its golden prime. On one of those Greek hills I walked in the literal footsteps of Paul.

On Mars Hill, in the shadow of the Acropolis, the apostle to the Gentiles confronted the builders of the temples of mythic gods. He had seen an altar dedicated to an Unknown God (the Athenians wanted to cover ALL their bases). Borrowing verses from some of their own poets, he challenged them to set aside the beautiful work of human hands, repent, and believe in the One God, and his appointed judge, now raised from the dead.

Some sneered with ridicule--this crazy man was suggesting something contrary to reason. But others wanted to hear more, and a few of them believed and followed.

We too are out here bringing our message into the court of public opinion. But are we connecting our encouraging, joyful, generous though ultimately challenging message to the embedded spiritual longings of the wider culture we are in?

O Lord in whom we live and move
and have our breath of being
Help us so to live and move through this 21st century world
that we may breathe the spirit of the everlasting. 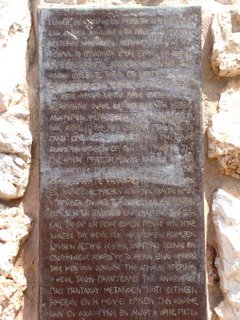 ‘Athenians, I see how extremely religious you are in every way. For as I went through the city and looked carefully at the objects of your worship, I found among them an altar with the inscription, “To an unknown god.” What therefore you worship as unknown, this I proclaim to you. The God who made the world and everything in it, he who is Lord of heaven and earth, does not live in shrines made by human hands, nor is he served by human hands, as though he needed anything, since he himself gives to all mortals life and breath and all things. From one ancestor he made all nations to inhabit the whole earth, and he allotted the times of their existence and the boundaries of the places where they would live, so that they would search for God and perhaps grope for him and find him—though indeed he is not far from each one of us. For “In him we live and move and have our being”; as even some of your own poets have said,“For we too are his offspring.” Since we are God’s offspring, we ought not to think that the deity is like gold, or silver, or stone, an image formed by the art and imagination of mortals. While God has overlooked the times of human ignorance, now he commands all people everywhere to repent, because he has fixed a day on which he will have the world judged in righteousness by a man whom he has appointed, and of this he has given assurance to all by raising him from the dead.’was
Posted by St. Matthew's Episcopal Church at 7:27 AM