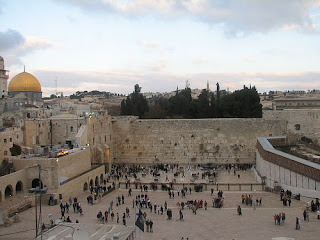 The Western, or Wailing, Wall stands in the Old City of Jerusalem, a visible remainder of the Second Temple, what was left after its destruction in the First Century. Beyond the wall and slightly to the left is the presumptive site of the Holy of Holies--and it is in that direction that some worshippers still direct their prayers. This was the place on earth where the presence of God was manifest. When the Ark of the Covenant completed its journey through the desert, it was on this mount that it rested. It was here that, on the Day of Atonement, the high priest went behind the innermost curtain, and offered sacrifices for the sins of the people--and his own.

When that unknown writer composed this letter to Jewish followers of Jesus, the repetitions of those sacrifices yet to be performed were numbered--though the writer did not know that. What the writer did know, and assert, was that Jesus had made a new covenant with his own blood, and that the Holy of Holies was no longer a hidden place, nor was it any longer a physical place at all. It has become the place where we encounter the living God. Our current customs and sacraments-- have value primarily as they point to that day when we shall, in truth, see our God face to face.
Posted by St. Matthew's Episcopal Church at 5:45 AM