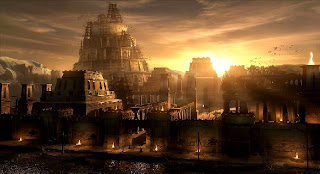 Babylon. What a city it must have been! Its walls towered as high as 300 feet, and were wide enough at the top for two carriages to pass side-by-side. And within the city was one of the Seven Wonders of the Ancient World, a "not-to-be-missed-marvel", the Hanging Gardens of King Nebuchadnezzar, built, it was said, for his queen. Perhaps better termed the "overhanging" gardens, for their lofty-reaching branches and vines. No one really has a precise idea of what they looked like, for they were long gone, as the city was, by the time of Christ. Nonetheless, many have imagined the garden towers reaching to heaven, and spilling over with lushness, suffused with ingenious irrigated moistness in the midst of the desert, a cross between greenhouse and penthouse. And yet for all their splendors and beauty, beyond them and with a notoriety that lingered long after them, was a corrupt-- and then a fallen-- kingdom. The ziggurats of Babylon arched high, but the sins of Babylon were piled higher.

The Israelites were conquered and were carried off as slaves to Babylon in the 6th century before the time of Jesus. "By the rivers of Babylon", says Psalm 137, "we lay down and wept when we remembered Zion." How could they sing the Lord's song in a strange and an alien land? Yet the exiled people remembered the home where they worshipped the one true God, they sang, they wrote the words that became Scripture.

Within two generations after the Exile the Babylonians had themselves fallen to the Persians. But the memory of that captivity in Babylon persisted down to John's day. John himself was an exile on the island of Patmos, on account of his preaching the Gospel, and now spending his days far from his roots in Jerusalem. In John's vision, Babylon, though physically in ruins 700 years after its fabulous peak, would in some (allegoric?) form rise again with its riches and its dominance of the world.

Would it rise again as the expression of a 21st century dictator who fancied himself as Nebuchadnezzar II? Saddam Hussein developed plans to restore Babylon to a new glory, to suit his own empire-forming agenda. Presumably Saddam's dream will never be realized, but the hold that wondrous Babylon has exerted and will continue to exert on human imagination means that dreams of human-built temples and mega-cities remain to be pursued again by egos yet unborn. The Fertile Crescent in which Babylon rose was the cradle of human-kind's first civilization. We as humans naturally seek out our roots. We will inevitably seek them in Babylon again. But if our constructed towers, like Babel, are built only through physical striving and with worldly wealth, they will fall again, and fall hard, and remain as relics of a lost city.
Global crises of this Third Millennia have brought humankind to another hinge-point of history. We are not today who we were 8 years, or 8 months, or 8 weeks, or even 8 days ago. Where we shall go from here is in God's hands, if we will trust Him and not false gods. Else our descent to ruin shall be our legacy for those who follow us.

Lord, help us to know that you alone are the source of richness in life.
May we long for the fruit that flowers in your gardens alone.
May we see the splendor that is reached only by walking through your gates.
Posted by Saint Matthew's Devotion at 1:02 AM