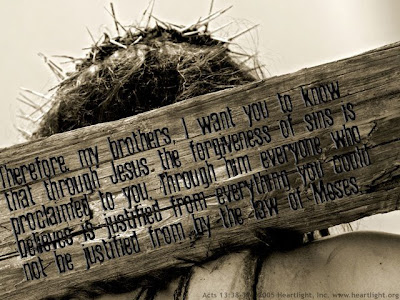 Abraham. Moses. David. These were (and are) the "Big Three", all time, for Jews everywhere, and certainly here for the children of the diaspora in Antioch.

Abraham was the patriarch--many peoples claim pride of descent from him through either Isaac (the Jews) or Ishmael (the Arab world). Abraham was called out of Ur (present-day Iraq) and left his father's many gods to make a covenant with the One God. Abraham was given a promise of a land for himself and his descendants, forever. It was an inheritance that the first-century Jews gathered in that synagogue, listening to Paul's exhortation, held very dear.

Moses was the Law-Giver, privileged to handle the stone tablets written with the Commandments, and to speak with God and experience the presence of God in a way that made his face shine. And Moses brought the gift of Torah--the first five books of the Bible, revered above all Scripture. The Law endures forever. And yet--the Law brought conviction of sin. And sin brought an immutable sentence with it that could not be freed apart from God's provision.

David was God's Anointed King, the man after God's own heart. The line of David was established for all time, and the hope burned still in Antioch, that the Son of David would resume the order of Kingship that had been established by David.

Paul invokes each of these honored ancestors, the dreams that still burned in the hearts of the Jews and the legacy that was promised and yet to come. Those dreams and that legacy had been fully realized, Paul asserts, in the person of Jesus. Jesus, who had ben crucified and died, yet had been raised from the dead in the presence of many witnesses, and through whom all of these people, with their ancient legacy, now could be set free.

An extraordinary claim to make, this message of salvation. People were understandably skeptical. And yet--they wanted to hear more. Theirs was not a hopeful time. The world that their ancestors had known was being wrenched apart and scattered to the wind. They were trying to hold to what they knew. Now, it seemed, God might be making something new from the old heritage. Dare they believe? Dare we?
Posted by Saint Matthew's Devotion at 4:22 AM