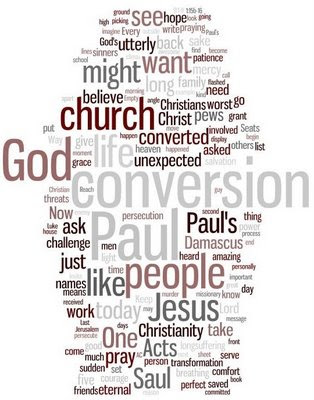 Why was Paul struck blind on the road to Damascus? Why was Ananias given a divine appointment to go and meet the man who, three days prior, wanted to kill him? And most of all, why was Paul of all people chosen to bring the name of God "before Gentiles and kings and before the people of Israel"--a great honor--and yet to suffer so much for the sake of that Name?
A recent book, Crashing Through, describes how stem cell transplants successfully restored sight to a man, Mike May, who had been blinded in a childhood accident. Mike had been thriving as a blind man in a sighted world, but when an astonishing new procedure was unexpectedly offered--through a seemingly chance appointment--he decided to go for it, despite numerous risks that came with that opportunity.Medical science at its leading edge nearly touches what is, in the 1st century and today, miraculous. Though hearing and smell provide us additional cues about our surroundings, it is sight that enables us to navigate through our world.
Paul was rendered helpless by his blindness, and reduced to praying for a healing appointment. Ananias was given something beyond "mere" sense--a vision from God that sealed that appointment.
Amazing Grace, how sweet the vision that saved a wretch like me! I once was lost but now am found, was blind but now I see! Paul is restored to sight, but he is starting to get a view of the world that will rock and topple his whole foundation. Scales fall from his eyes, but what drops from his heart is far more freeing. His restored sight allows him to freely move about, but his freedom will come under a new drive, to go to many and tell an astonishing story of how that new sight can be brought to the world.
Eleven score and thirteen years ago, 56 men trusted in their Creator and divine Providence and signed a treasonous document. They could not yet see the nation that would result from that tumultuous birth. Their children's children's children kept the vision alive through an even bloodier war. Today we too are still living into the dream that they had, battling dark forces around the world and in our own streets. May we too pledge our lives to the proposition that all are created equal and free.
Amen.
Posted by Saint Matthew's Devotion at 9:52 AM