The proclamation of the kingdom of Lord and Christ Jesus reaches its climax in Acts 28. Paul travels to Rome to meet the emperor and god of the known world--Caesar. The spread of the gospel of the Resurrected Jesus meant that Caesar’s throne was being challenged by a grass roots movement that was openly defiant of the king of this world. Right down the street from Caesar’s palace, Paul was preaching the “kingdom of God and teaching the things which concern the Lord Jesus Christ” (Acts 28:31). In his recent book, "Surprised by Hope" N.T. Wright puts it this way, “the kingdoms of the world are now claimed as the kingdoms of Israel’s God.” The end of the Book of Acts is, however, not the beginning of the end--it is the end of the beginning. Abruptly and concisely, the book wraps it up and ties it with a bow.
And the next chapter--Acts 29--is the story we find ourselves in. It is the story of the Church as it lives into the message of Paul which is the Good News: the proclamation in all boldness that the kingdom of God is here and alive in the person of Jesus Christ. 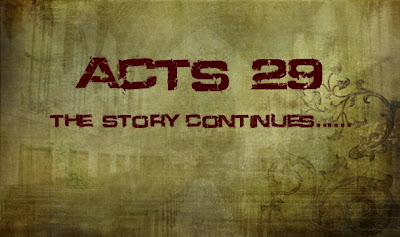 Posted by Saint Matthew's Devotion at 1:19 AM