TAKE THE TIME TO SAY THANK YOU 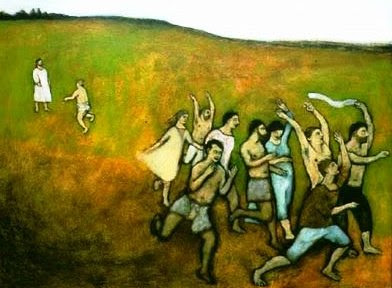 “When one of them saw that he was healed, he went back to Jesus, praising God in a loud voice. Then he bowed down at Jesus’ feet and thanked him. (And this man was a Samaritan.) Jesus said, ‘Weren’t ten men healed? Where are the other nine?’” Luke 17:15-17 (NCV)


Only one in ten took time to tell Jesus thank you. Jesus asked a striking question, “Where are the other nine.” Indeed, where had they gone. What were they doing that was so important that they did not have time to thank the one that saved them from leprosy? Let’s imagine where the “other nine” might have been for a moment. The purpose is not to condemn them, but to recognise that we might easily have been among them.


One of the “other nine” might have been hurrying to the temple to complete the legal requirements that went along with such a healing. So focused on keeping the rules and getting things done in the right order that he did not have time to stop and say thank you.


Another was just following the crowd. If the majority had turned back to tell Jesus thank you, he would have gladly followed. It would have never occurred to him to do something other than what “the others” were doing. Those who take the time to say thank you are those who stand above the crowd, not simply with the crowd.


One of the nine might have been afraid to go back. Someone with the power to heal his leprosy might also use that power to give him leprosy again. He might have felt that he didn’t really deserve so great a blessing. What if he said or did the wrong thing and Jesus found him out for who he really was.


A few of the nine might have felt embarrassed to go back. As a leper he’d been used to thinking of himself as a useless outcast. What difference would his word of thanks make to a powerful public figure like Jesus.


Odds are that all of us find ourselves amidst “the others” at times. Today take some time to be “the one” who tells Jesus and tells others “thank you for what you’ve done.”


Family Discussion Question: What have you “forgotten” to thank God for?

Posted by Saint Matthew's Devotion at 4:59 AM